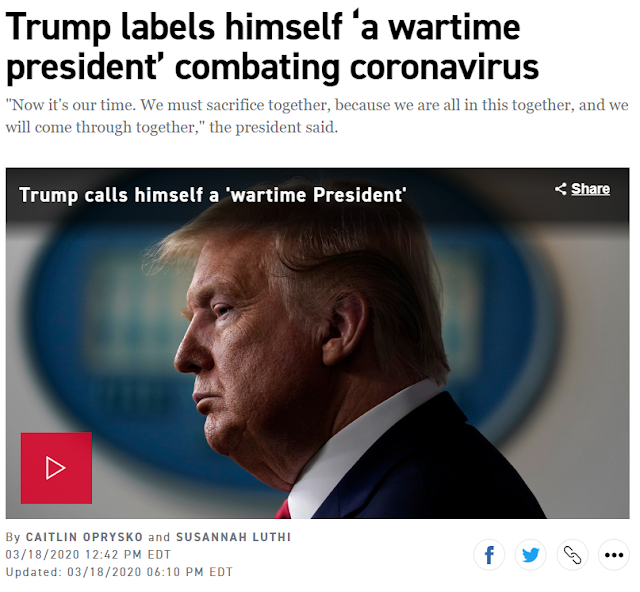 President Donald Trump on Wednesday began to invoke the rhetoric of “a wartime president” as he told reporters he views himself as one, while his administration fights to contain the spread of coronavirus and mitigate the economic fallout from the global pandemic.

“I do, I actually do, I'm looking at it that way,” Trump told reporters during a press briefing at the White House when asked whether he considered the U.S. to be on a wartime footing. “I look at it, I view it as, in a sense, a wartime president. I mean, that's what we're fighting.“
Trump has repeatedly referred to U.S. attempts to battle the virus — which has sickened thousands across the U.S. and killed more than 100 — as a “war” against an “invisible enemy.” But during Wednesday’s briefing he went the furthest yet in adopting the rhetoric of a commander in chief during wartime.

At the top of his remarks, the president pointed to the havoc the virus has begun to wreak on the economy, telling reporters in the White House briefing room that the pandemic would require a response unseen since World War II.

“Every generation of Americans has been called to make shared sacrifices for the good of the nation,” he told reporters, offering examples like teenagers volunteering to fight in the war and workers sleeping on factory floors.