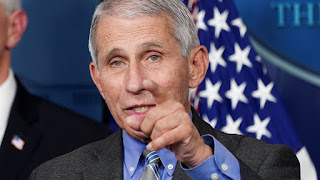 As we wake up on this Good Friday morning, nearly 17,000 Americans have died from the COVID-19 in the United States; there have been nearly 500,000 confirmed cases. After a painfully slow start, there have been nearly 2.4 million tests, with 19.4 percent registering positive.
Hospitalizations appear to be leveling off, even as the death tolls rise, but widely watched models have lowered the number of Americans who are expected to die. The IHME estimate has lowered its projections from nearly 94,000 deaths by late summer to 60,400.
Amid the uncertainty, one thing seems quite clear: it would all be much worse if not for Anthony Fauci.
However briefly, Fauci was able to get Donald Trump to listen to him and to recognize the severity of the pandemic. Even as Trump was openly musing about reopening the economy by Easter Sunday, Fauci and other experts managed to catch Trump's attention long enough to explain the deadly implications of that move.
Maybe they showed him pictures. Or charts. Maybe it was the estimate of 2.2 million American deaths if the country didn't take drastic measures. But somehow they broke through the carapace of his narcissism and alternative reality to get him to tune out the truthers, cranks, and Hannitys long enough to declare a national emergency and back off plans to prematurely reopen the country.
It's always a risky business to delve too deeply into the mind of Donald Trump, but somehow Fauci got him to listen and, for a few news cycles, change his tone.
Of course, this won't last, but it's worth pausing for a moment to consider the Faucian Bargain here.
Like so many who have cycled through this bizarre presidency, Fauci has been willing to make some sacrifices in order to stay in the room. It has been a remarkable balancing act. He has had to endure Trump's ignorance and erratic fabulism and has occasionally had to correct his lies. But he has also held his tongue at critical moments; Fauci has not openly criticized the administration's failures and has offered the obligatory praise when necessary.
But he has never gone full Faustian.
In the full-on Faustian bargain, you don't just make compromises: you sell your soul. For a time, it seems like a good deal, because you get all sorts of good things: tax cuts, conservative judges, rides on Air Force One. Relevance. Re-election. Photo Ops with Ivanka. A seat at the table. But the problem of the Faustian Bargain is that the price turns out to be too high. "It profits a man nothing to give his soul for the whole world. . . but for Wales!”
Throughout Trump's presidency, there has been a parallel dilemma: to serve or not? Many principled public servants made the choice early on that they didn't want to run off with this circus and refused to be part of what Trump was doing. But others made the calculation that they could do more good by being inside the tent. This was the story we heard again and again; yes, things were awful, but they would have been so much worse had there not been adults in the room.. We don't yet fully know all of the horrors, outrages, and blunders that were prevented by the fact that James Mattis or John Kelly were there. Think of these as the Unknown Awfuls that we were lucky to avoid.
When the histories are written and the process of rebuilding reputations begins in earnest, we're are going to be hearing this defense from lots of folks. Former Speaker Paul Ryan defended his own support/silence for Trump by telling Tim Alberta, "Those of us around him really helped to stop him from making bad decisions. All the time."
"We helped him make much better decisions, which were contrary to kind of what his knee-jerk reaction was," Ryan said. "Now I think he's making some of these knee-jerk reactions."
Ryan is gone now. So is Mattis, Kelly, H.R. McMaster... the list is pretty long.
But at this crucial moment, Anthony Fauci is still in the room. And we should be grateful for that. We get occasional hints of what he's going through, but God knows how bad it is. He has to put up with moronic crackpots like Peter Navarro, and has to stay quiet as the Trump Cult launches know-nothing attacks on science and against him personally. Just last week, we learned that threats to Fauci had lead the government to step up his security.
So far, though, the bargain has held. But these things often end badly and Fauci is about to be tested again.
Ironically, the success of the measures that Fauci had urged is now being used to argue for moving away from them, Much of TrumpWorld seems pivoting back to the argument that the "cure shouldn't be worse than the disease," and pushing for a quick restart of economic activity. Attorney General Bill Barr may have been a leading indicator of sentiment in Trump's inner circle, when he called the stay-home orders "draconian," and suggested that by the end of this month "I think we have to allow people to adapt more than we have and not just tell people to go home and hide under the bed, but allow them to use other ways — social distancing and other means — to protect themselves."
Trump, who is watching both the economy and his poll numbers sinking, is clearly growing impatient with the shutdown. The Washington Post is reporting:


The Trump administration is pushing to reopen much of the country next month, raising concerns among health experts and economists of a possible covid-19 resurgence if Americans return to their normal lives before the virus is truly stamped out.
Behind closed doors, President Trump — concerned with the sagging economy — has sought a strategy for resuming business activity by May 1, according to people familiar with the discussions.

But as the Washington Post notes, "The White House cannot unilaterally reopen the country. Though the Centers for Disease Control and Prevention has issued federal guidance advising people to avoid social gatherings, work from home and use pickup and delivery options for food, it is state officials who have put the force of law behind those suggestions."
So what experts like Fauci say will still matter. A lot.
Fauci's approval ratings are still far higher than Trump's so he can still influence how the country reacts. But that also means that he poses a threat to Trump.
So far, Fauci is carefully trying to navigate the politics here, warning against prematurely opening places like New York City. But strains are already showing. The Fox News-talk radio-feedback loop is already targeting Fauci for emphasizing public health over economics.
If Trump decides to move too quickly to reopen the country for business, Fauci will face a stark choice. Stay at the table or speak out.
Within days, we may learn the full cost of Fauci's bargain


From the Bulwark, a very interesting online publication