Pastor Landon Spradlin wasn't worried about coronavirus when he went to New Orleans to preach during Mardi Gras. A month later he was dead.
"He loved to laugh. He loved to play guitar. He played guitar even when he wasn't supposed to," says Jesse Spradlin of her father, Landon.
"He was just the best man in the world."
One day when this is all over, the wife and five children of Pastor Landon Spradlin hope to hold a large celebratory memorial for him.
For now they have had to make do with a funeral at which there were just a handful in attendance, including the blues guitarist who played at the graveside.
A little over a month ago, Pastor Spradlin, who was 66, drove with his wife Jean the 900 miles (1500 km) from their home in Virginia to Louisiana for Mardi Gras.
He viewed the festivities as an opportunity, through music, to save the souls of some of the hundreds of thousands of people that would attend.
He was joined by two of his daughters who came over from Texas.
"His mission was to go into pubs, clubs and bars, play the blues and connect with musicians and just tell them that Jesus loved them," says Jesse Spradlin, 28.

"Mardi Gras is like Times Square in New York during New Year's Eve. It's a sea of people just drinking and partying," she says. "He was loud and laughing and in his element."
Over recent years Pastor Spradlin had realised a dream of using the preaching he had honed in churches across three states and taking it to the streets through the medium he loved.
He had been playing instruments since the age of four and in 2016 was inducted into the Blues Hall of Fame, but it was religion that he felt had saved him from alcoholism and drug addiction in his twenties.
Those dark years are why he now had a particular affinity for those who felt down and out, something he could relate to.
At Mardi Gras, the family band played in New Orleans' busy Jackson Square, unaware of the threat they faced.
"I don't even remember us talking about the virus," says Naomi Spradlin, 26. "With what's happened we keep looking back, and we didn't talk about it once."
They were not the only ones. Even though it had been more than a month since the first coronavirus case in the US, Mardi Gras went on as planned. 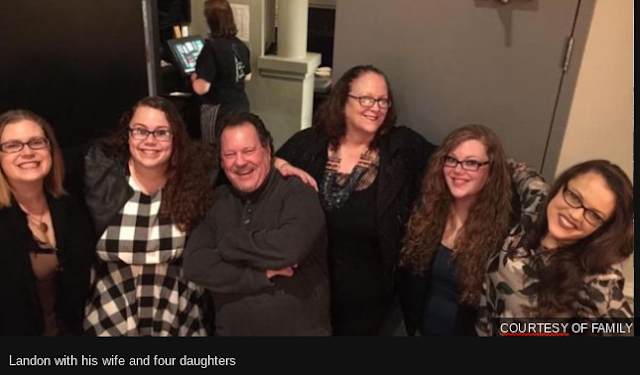